£12.99
Out Of Stock
The Broons Family have launched their new 4 CD compilation: Summer Holiday Album. With over 100 original recordings of chart hits from top recording stars, including Elvis, Sinatra, The Beatles, Cliff, Everly's and more. This 4 CD compilation is a follow-up to 3 previous very successful Broon's albums, The Broons Braw Part, Jukebox and Christmas, all of them spent weeks in the charts and getting sales awards from the music business.
Skip to the end of the images gallery 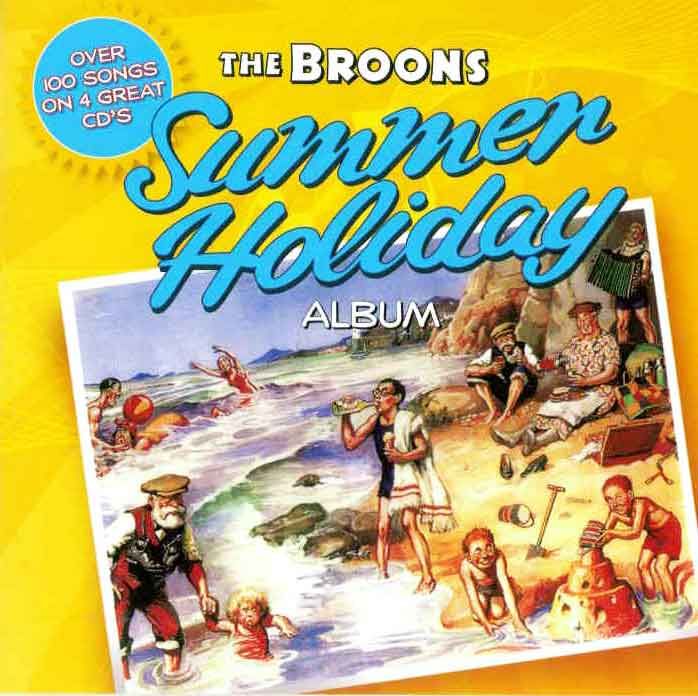 Skip to the beginning of the images gallery
Description
The Broons Summer Holiday Album Specification: Number of Discs: 4 Code: BSUMA Disc 1: 1. Here Comes Summer by Jerry Keiler 2. Rock a Hula Baby (Twist Special) by Elvis Presley 3. Itsy Bitsy Teenie Weenie Yellow Polkadot Bikini by Bryan Hyland 4. Move It by Cliff Richard 5. Rubber Ball by Bobby Vee 6. Sea of Love by Marty Wilde 7. La mer (Beyond the Sea) by Bobby Darin 8. Spanish Harlem by Ben E King 9. Let's Twist Again by Chubby Checker 10. Hey LIttle Girl by Del Shannon 11. Vacation by Connie Francis 12. Love Letters in the Sand by Pat Boone 13. A White Sport Coat (And a Pink Carnation) by Marty Robbins with Ray Conniff 14. Lollipop by The Chordettes 15. FBI by The Shadows 16. Here Comes That Feeling by Brenda Lee 17. Speedy Gonzales by Pat Boone 18. I Remember You by Frank Ifield 19. Things by Bobby Darin 20. Chain Gang by Sam Cooke 21. Let There Be Drums by Sandy Nelson 22. You Got What It Takes by Marv Johnston 23. Johnny Comes Marching Home by Adam Faith 24. Stuck on You by Elvis Presley 25. Summertime Blues by Eddie Cochrane 26. Hats off to Larry by Del Shannon 27. Pick a Bale of Cotton by Lonnie Donegan 28. Mr Sandman by The Chordettes 29. Ginny Come Lately by Brian Hyland 30. You Don't Know by Helen Shapiro 31. Charlie Brown by The Coasters 32. Quando, Quando, Quando by Pat Boone 33. Summer Holliday (Singalong) by Glebe St Chanters Disc 2 34. The Theme from "A Summer Place"by Percy Faith And His Orchestra 35. Nice 'n' Easy by Frank Sinatra 36. What a Diff'rence a Day Makes by Dinah Washington 37. Let There Be Love by Nat King Cole 38. Stranger on the Shore by Acker Bilk 39. Climb Ev'ry Mountain by Shirley Bassey 40. Stranger in Paradise by Tony Bennet 41. Spanish Eyes by Al Martino 42. Softly as I Leave You by Matt Monro 43. I Love How You Love Me by Jimmy Crawford 44. I'll See You in My Dreams by Pat Boone 45. What Kind of Fool Am I by Sammy Davis Jnr 46. Island in the Sun by Harry Belafonte 47. The Green Leaves of Summer by Kenny Ball 48. Please Help Me I'm Falling by Hank Locklin 49. He'll Have to Go by Jim Reeves 50. Tea for Two (Cha Cha) by The Tommy Dorsey Orchestra 51. Misty by Johnny Mathis 52. Lazy River by Bobby Darin 53. Why by Anthony Newley 54. I'm Lookin' out the Window by Cliff Richard 55. More Than I Can Say by Bobby Vee 56. I'll Take You Home Again Kathleen by Slim Whitman 57. P.S. I Love You by The Beatles 58. The Dr. Kildare Theme by Johnnie Spence & His Orchestra 59. Summertime by The Marcels 60. Besame Mucho by Jet Harris 61. Tonight by Shirley Bassey 62. Whistle Down the Wind by TMK Collective Disc 3: 63. Runaway by Del Shannon 64. (Let Me Be Your) Teddy Bear by Elvis Presley 65. Love Me Do by The Beatles 66. Cathy's Clown by The Everly Brothers 67. Telstar by The Tornadoes 68. Roll over Beethoven by Chuck Berry 69. Tutti Frutti by Little Richard 70. Dreamin' by Johnny Burnette 71. Hit & Miss (Theme from Juke Box Jury) by The John Barry Seven Plus Four 72. Hit the Road Jack by Ray Charles 73. Riders in the Sky by The Ramrods 74. Sherry by The 4 Seasons 75. Guitar Boogie Shuffle by Bert Weedon 76. Not Fade Away by Buddy Holly 77. When Will I Be Loved by Everly Bros 78. Good Luck Charm by Elvis Presley 79. The Wanderer by Dion 80. Cupid by Sam Cooke 81. When My Little Girl Is Smiling by Craig Douglas 82. Young World by Rick Nelson 83. You Always Hurt the One You Love by Clarence 'Frogman' Henry 84. Lovesick Blues by Frank Ifield 85. Jealousy by Billy Fury 86. Giddy up a Ding Dong by Freddie Bell & The Bell Boys 87. Ya Ya Twist by Petula Clark 88. The Girl Can't Help It by Little Richard 89. I Love You by Cliff Richard 90. It's Late by Ricky Nelson 91. Run to Him by Bobby Vee 92. Long Tall Sally by Little Richard 93. Wonderful Land by The Shadows 94. Right Said Fred by Bernard Cribbins 95. Little Sister by Elvis Presley Disc 4: 96. The Song of the Clyde by Kenneth McKellar 97. Ye Banks & Braes by Celtic Spirit 98. Gaelic Waltz Medley: Farewell / Leaving Stornoway / Sunset Over Foula / Ronas Voe by Ceilidh Minogue 99. Wild Mountain Thyme by The Munros 100. Rothesay Bay by The Lomond Lads 101. Dark Island by The Lone Piper 102. Millport in the Morning by The Trailenders 103. Maid of the Loch by Celtic Spirit 104. Flow Gently Sweet Afton by Celtic Spirit 105. Ye Jacobites by Name by The Munros 106. Highland Cathedral by The Lone Piper 107. Sailing by The Munros 108. The Wee Toon o' Balloch by The Lomond Lads 109. Whiskey in the Jar by The Munros 110. Over the Sea to Skye by Celtic Spirit 111. Loch Lomond - Amazing Grace by The Munros Featuring Julienne Taylor 112. Caledonia by The MacDonald Bros 113. A Scottish Soldier by Andy Stewart 114. Mist Covered Mountains by The Munros Featuring David Methven 115. Braveheart by The Munros 116. Bluebell Polka by Jimmy Shand 117. Island Song by Celtic Spirit 118. Oor Wee Heilan Hame by The Lomond Lads 119. Will Ye No Come Back Again by The Munros